I only update my headshot once every several years. I decided it was time once friends and colleagues started telling me that I’m unrecognizable in my current headshot. Who knew beards has such an impact on facial distinction? Anyway, I spent some time tinkering with a nice studio setup I purchased in order to take some decent headshots. Here goes nothin! END_OF_DOCUMENT_TOKEN_TO_BE_REPLACED

“If you’re lost out where the lights are blinding Caught in all, the stars are hiding That’s when something wild calls you home” Had the opportunity to do some snowshoeing in the mountains of Colorado yesterday with some friends (my first time!). After a day hike at over 10,000 feet above sea level, we returned with our gear to get some shots of the stars. … END_OF_DOCUMENT_TOKEN_TO_BE_REPLACED

I found a pathway to the stars and its not too far from home 😀 Aligning the milky way galaxy with particular landscapes can prove challenging since the orientation of our galaxy’s core shifts directions as the months change. Thankfully, in the northern hemisphere, the summer months allow for the best milky way viewing fairly early in the evening. Now if we could just get … END_OF_DOCUMENT_TOKEN_TO_BE_REPLACED

The past couple of days in Southeastern New England have been a bit of a heat wave. And being from Massachusetts, we all know that heatwaves usually break with thunderstorms! END_OF_DOCUMENT_TOKEN_TO_BE_REPLACED

“To me, photography is an art of observation. It’s about finding something interesting in an ordinary place… I’ve found it has little to do with the things you see and everything to do with the way you see them.”

Aspiring photographers or anyone who wants to learn how to take more creative photographs. No photo-editing software is required, just a desire to learn and experiment with your camera!

The world offers no shortage of amazing subjects and experiences to photograph. In 2017, it’s estimated that people will take nearly 1.2 trillion photos around the world. Many of these photos will be simple snapshots—photos defined as informal, taken quickly or spontaneously, and sometimes without thorough consideration of composition. In many cases, that’s all a situation calls for, but for many subjects it’s often prudent to dig a little deeper and get creative with your photographs. Many variables come into play that can shape the quality and perspective of your photos. Things like light, composition (how a subject is framed), depth, weather, shutter speed (duration of the exposure), and of course location, all play a part in creating unique and interesting photographs.

In this post I’ll delve into these different variables and showcase a wide array of photos in order to expose the world of possibility you can capture with your camera (or, in some cases, your smartphone). Take some time to explore different ways to capture scenes and subjects and I promise your experiences will be much more memorable and enjoyable.

In the world of photography the word “exposure” — which is derived from the days of film — is just a fancy way of saying “photograph.” Depending on the roll of film, photographers were often limited to a couple dozen or so “exposures” per roll, in other words, a dozen or so photos per roll. Even though many of us use digital cameras these days, “exposure” is still an accurate term since the camera’s sensor is exposed to light, which allows photographs to be captured.

More importantly, for the sake of this article, there’s a difference between a “correct exposure” and “creatively correct exposure.” Technically speaking, correct exposures are the way in which your camera’s settings (aperture, shutter speed, and ISO) work together to capture a proper photo of what you’re seeing. Smartphones’ and cameras’ “auto” settings will always attempt to take a photo at the “correct” exposure.

Here’s an example of a correct exposure of Multnomah Falls in Oregon taken by Caleb Jones. In this gorgeous shot, we can see in the photo above that the light is well balanced and the waterfall appears to be frozen in time. The shutter speed of this shot — or the time the shutter was left open to allow light to be absorbed by the camera sensor — was a fraction of a second.

Here is another, nearly identical shot of Multnomah Falls shot by Blake Verdoorn. Besides the coloring, can you spot the difference between these two exposures? In Blake’s photo, we can see that the water has more of a smooth, flowing effect. This particular creative effect is called a “long exposure,” which means the camera shutter stays open for a long period of time. This allows the sensor to absorb more light and catch more movement in photographs.

Long exposures are some of my favorite photos. We can really push the boundaries of reality when we get creative and involve time as a primary variable when creating photographs. Depending on the camera being used, we can take exposures from a fraction of a second to many hours. It’s incredible what can be captured when the camera shutter is left open for a significant amount of time. For these, tripods are usually required to hold the camera steady. And photos like these are also possible on some smartphones with the right apps.

In the summer of 2016 I spent some time in the deep woods of Brownfield, Maine, where the stars were incredibly bright due to a lack of light pollution from cities. This shot is both a long exposure (30 seconds long) and a correct one. The photo is nearly identical to how you would see the stars if you looked up in this same location. Since the night sky is often difficult to capture due to the lack of available light, it’s necessary to leave the shutter open for 20 or more seconds so the camera sensor can capture what our eyes can see.

Here’s where things get interesting. The photo above is not a manipulation, nor was it altered using image-editing software in any way — it’s a creative exposure directly from the camera. After I captured the initial photo of the stars, I set a remote timer to take this second one. Remote timers are necessary to capture exposures over 30 seconds for most cameras on the market today. In this shot, I left the shutter open for just over 28 minutes — 1700 seconds to be exact! That basically means that for just over 28 minutes light was continuously being absorbed by the camera sensor and being compiled into one photograph.

Due to the spinning of the earth on its axis, the stars appear to be moving as time goes on, creating light trails. This is called a “star trail” photograph. These are extremely fun to capture. With that being said, they require a lot of prior research and patience to obtain. Time of year, weather patterns, and moon orbital patterns all play a part in creating these type of photos — but that’s an article for another time!

Location research and scouting is paramount to capturing creative shots for many types of scenery and subjects.

We can really push the boundaries of reality when we get creative and involve time as a primary variable when creating photographs.

A few examples of some of fantastic, creatively exposed shots

Typically with snow-covered scenes, the sky is often dull and gray. However, snowy scenes can look extremely gorgeous and dramatic once the sun comes out, like this shot captured by Pigoff Photography. The trick here is monitoring weather patterns to see when snow storms are predicted to dissipate. Sometimes luck also plays a part!
Zooming in on waves during sunrise or sunset can make for some really amazing patterns, as we can see in this shot by Jeremy Bishop. If you’re feeling really adventurous, try some long exposure shots at the beach just as the sun dips behind the horizon—you’ll find that your photos resemble pastel paintings!

Bruce Wunderlich wrote up a wonderful article on how to understand and create great depth of field.

Depth can be used to make scenes far more interesting and less flat, which we can see in this photo of a surfer by Annie Spratt. This technique, referred to as shallow depth of field, is a favorite amongst most photographers. Thanks to recent advancements in smartphone technology, capturing exposures with high depth of field is easy.

This just barely begins to scratch the surface of what’s possible in modern photography when a little attention is paid to the world around us. Whether you have a smartphone, a point-and-shoot, or an advanced camera — so long as you’re up to explore and experiment, there’s no shortage of photos to be created! For digging deeper into creative exposures, I recommend the book Understanding Exposure by Bryan Peterson.

This article was originally written for The Daily Post on WordPress.com in March, 2017.

Interested in cultivating a photoblogging habit? Check Blogging U., where we offer two courses designed for photography lovers. 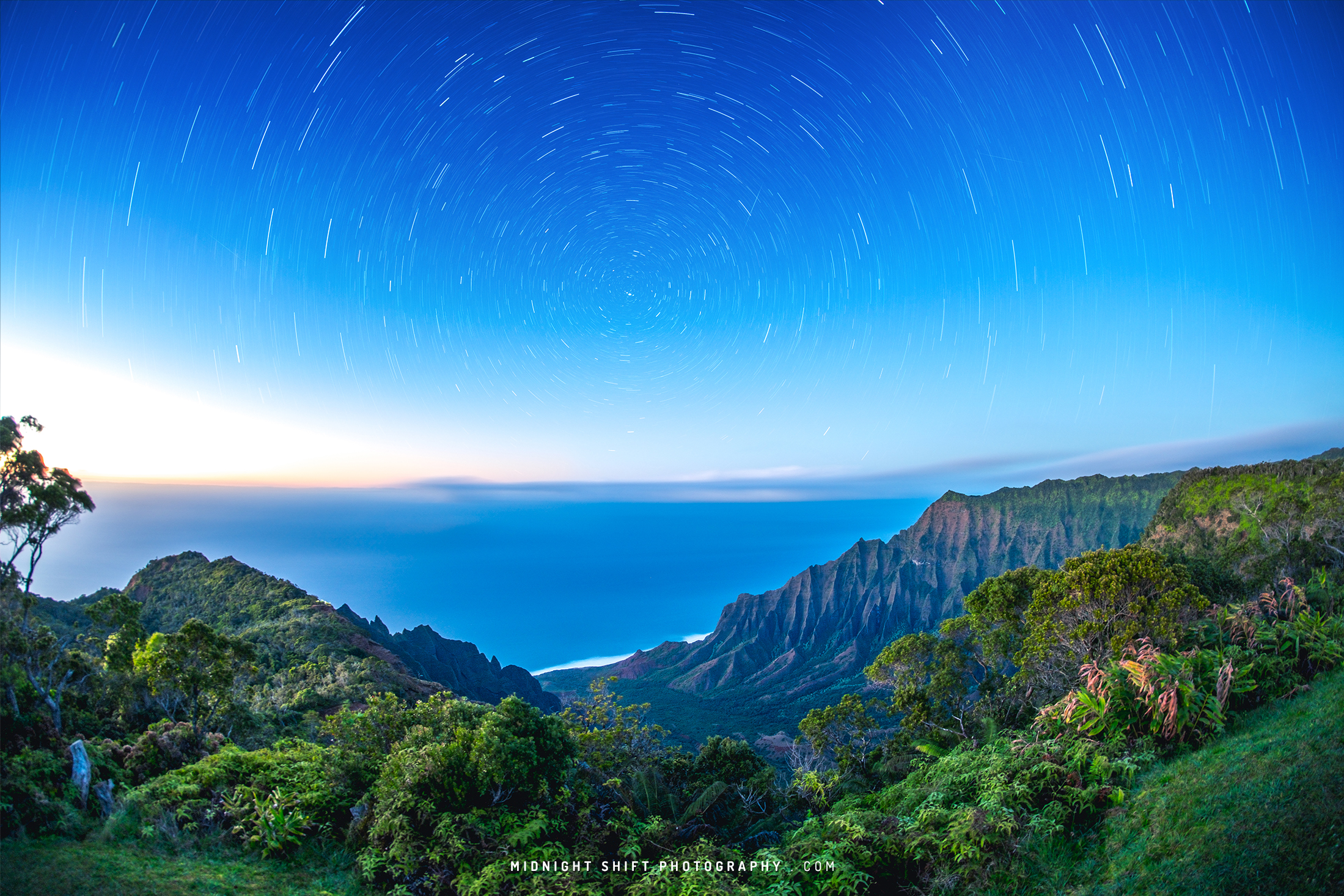 Star trails I captured at Kalalau Lookout on the island of Kauai, Hawaii.

“To me, photography is an art of observation. It’s about finding something interesting in an ordinary place… I’ve found it has little to do with the things you see and everything to do with the way you see them.”

Who this post is for: Aspiring photographers or anyone who wants to learn how to take more creative photographs. No photo-editing software is required, just a desire to learn and experiment with your camera!

The world offers no shortage of amazing subjects and experiences to photograph. In 2017, it’s estimated that people will take nearly 1.2 trillion photos around the world. Many of these photos will be simple snapshots—photos defined as informal, taken quickly or spontaneously, and sometimes without thorough consideration of composition. In many cases, that’s all a situation calls for, but for many subjects it’s often prudent to dig a…

Sat down tonight with some nostalgic tunes from my high school days (think Senses Fail, Finch, and more). Thought about all the fun I used to have jamming out until the sun came up, creating image manipulations and digital paintings. It’s been well over a decade since I got lost in photoshop just creating art for the fun of it. For old time sake, I whipped up this image—a photograph I took of an abandoned farmhouse in Westport, Massachusetts mixed with a photograph of the milky way galaxy, blended with some unexpected color inspired by some infrared photography I’ve shot.

Feels good to clear the mind and experiment. Enjoy!

END_OF_DOCUMENT_TOKEN_TO_BE_REPLACED

While in Amsterdam with some colleagues this past February, we stayed on a houseboat for a couple of nights located on one of the canals. The gentle rocking of the boat at night was a wonderful way to fall asleep. While I found Amsterdam to be a bustling city during the day, it became quite gentle later in the evenings. Houseboats line the edges of … END_OF_DOCUMENT_TOKEN_TO_BE_REPLACED

Sometimes the best star trails are captured during very cold nights on the beach. Taken at Sakonnet Point, Little Compton, Rhode Island. In the distance you can see Little Cormorant Rock Lighthouse. END_OF_DOCUMENT_TOKEN_TO_BE_REPLACED

Spent an afternoon hiking around Ke’e Beach and the Nā Pali Coast on the Kalalau Trail. Incredible sights to be seen as this part of the island is a rainforest END_OF_DOCUMENT_TOKEN_TO_BE_REPLACED

All photography and content on this site is my original work unless otherwise noted. Feel free to share it, but do provide credit, please.

My other side passions